For years, city officials and staff have been working to make traveling without a car easier in Lone Tree — a strategy used to attract residents and jobs, and reduce greenhouse gas …

This item is available in full to subscribers.

Our print publications are advertiser supported. For those wishing to access our content online, we have implemented a small charge so we may continue to provide our valued readers and community with unique, high quality local content. Thank you for supporting your local newspaper.

An RTD light rail train arriving at Sky Ridge Station in Lone Tree on Nov. 9.
By Tayler Shaw
The Nov. 9 tour attracted a large group of attendees, including representatives from RTD, CDOT and the City of Centennial.
By Tayler Shaw
Rachel Hultin, the sustainable transportation director for Bicycle Colorado, speaking during the Nov. 9 tour.
By Tayler Shaw
Posted Thursday, November 17, 2022 7:59 am
Tayler Shaw
tshaw@coloradocommunitymedia.com

For years, city officials and staff have been working to make traveling without a car easier in Lone Tree — a strategy used to attract residents and jobs, and reduce greenhouse gas emissions.

Colorado has a statewide goal to reduce 2050 greenhouse gas emissions by at least 90% of the levels of emissions that existed in 2005, per House Bill 1261.

Transportation is the largest contributor to the state’s greenhouse gas emissions, according to the Colorado Energy Office. Opting to use public transit, biking and/or walking instead of driving will help reduce transportation emissions, the office reported.

“We’re really looking at our transportation holistically and trying to figure out: How do we build a transportation system that works for everyone, that’s really leading with multimodal solutions?” said Rachel Hultin, Bicycle Colorado’s director of sustainable transportation.

“Lone Tree is doing — has been doing a great job for 20 years, and their vision for the next 20 is even more inspiring,” she said.

A large group of people — including representatives from the City of Centennial, Regional Transportation District (RTD) and Colorado Department of Transportation (CDOT) — gathered on Nov. 9 for a tour that highlighted Lone Tree’s light rail stations, bicycle networks and mixed-use developments.

“We plan, today, to take you through Lone Tree’s past, present and future, one light rail stop at a time,” said Lone Tree Mayor Pro Tem Wynne Shaw. 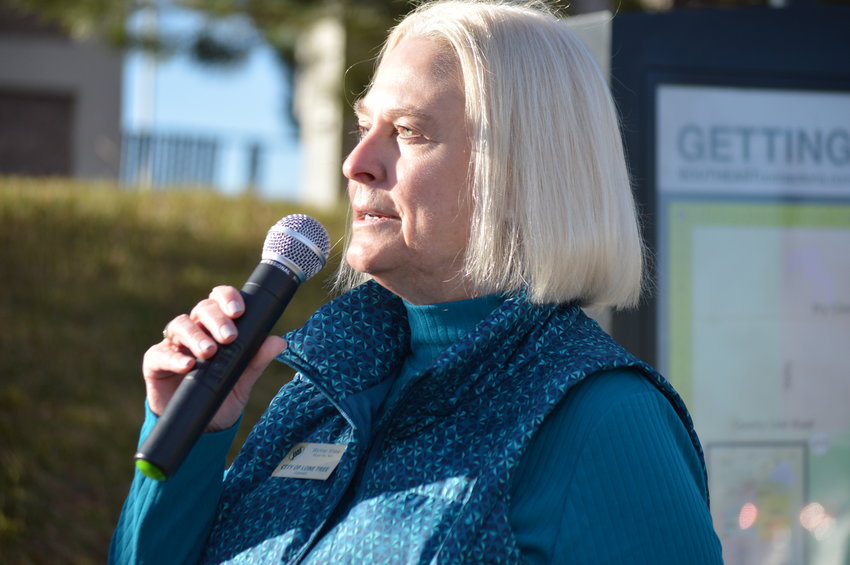 When Lone Tree was formed in 1995, city founders wanted to create a connected and walkable community, Shaw said.

“One of our first actions was to realize transit was central to our bigger planning efforts,” she said.

In 2002, the City of Lone Tree asked RTD to evaluate the feasibility of joining the RTD District, given the entire city was not within the legal boundaries of the district at that time, according to an RTD report.

Lone Tree voters approved annexation into the district in 2003. According to a 2004 report from the Colorado Department of Revenue, the RTD sales and use tax rate was 0.6%.

“That was an intentional decision by Lone Tree voters to tax themselves for no service, because they wanted this light rail extension and they recognized how important it would be to the community,” said Lone Tree Mayor Jackie Millet.

Originally, the RTD Lincoln Station, located at 10203 Station Way, was the end-of-line station for the southeast rail line, Millet said.

“We are so proud to have seen that vision come to fruition,” Millet said. 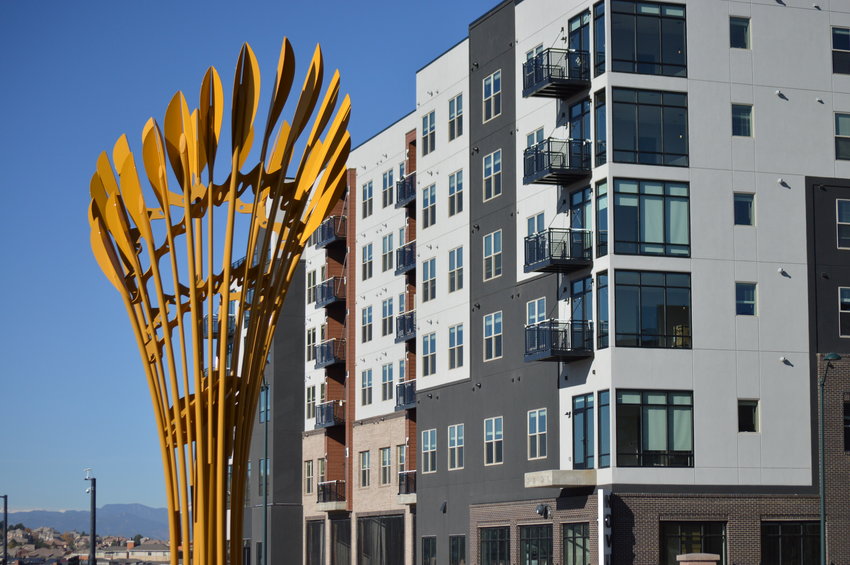 The view from Sky Ridge Station in Lone Tree on Nov. 9.

To develop transit-oriented communities in Lone Tree, the city has focused on establishing multi-family housing, retail space and office space near the RTD stations.

Within a half-mile of Lincoln Station, for example, there are 2,900 multi-family units and 30,000 square feet of retail, Millet said.

He credited its growth to employers like Sky Ridge Medical Center and Charles Schwab that, prior to the station’s establishment in 2019, invested in the area.

They understood that living in a mixed-use community next to transit was beneficial for their real estate values and employees, he said.

Denver South works with six jurisdictions to support transportation and economic development in the region, and it helps provide funding for local projects, she said.

“Now, of course — more than ever — transportation issues matter as the population density continues to grow in Colorado,” Machado said. 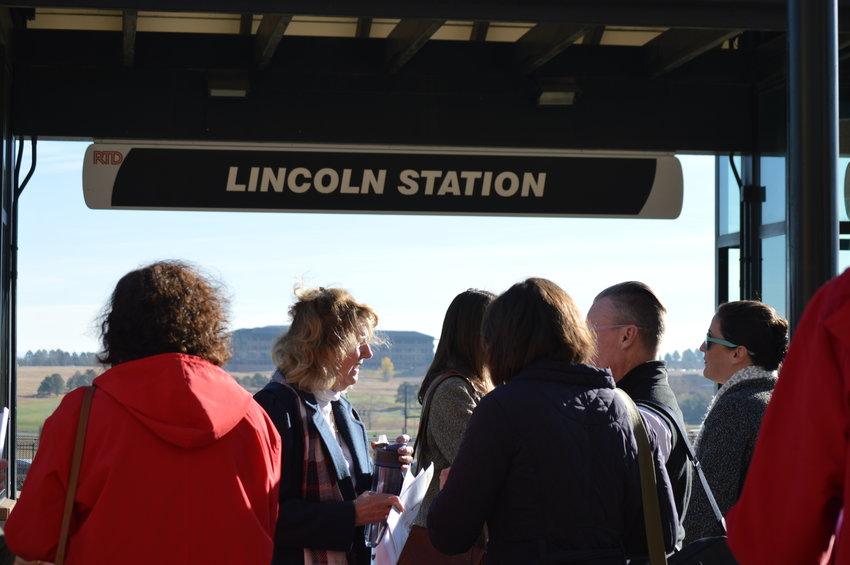 Tour attendees wait for a light rail train at Lincoln Station in Lone Tree on Nov. 9.

Although Lone Tree has been able to attract jobs and residents through providing multimodal transportation, a downside has been the housing cost increase, Millet said.

“I’m sad to see how expensive it is to live in the City of Lone Tree right now,” Millet said, explaining the property values have dramatically increased.

“So, as you are thinking about these choices in your community, I would encourage you to think about the affordability of your housing when you do that, because we have seen our home prices go up dramatically,” she said. “That is the downside of providing it all.”

“We, in Lone Tree, are really trying to find ways to keep that affordability coming through additional projects. This one happens to be 67 units,” First said. “It’s small, but it’s mighty.” 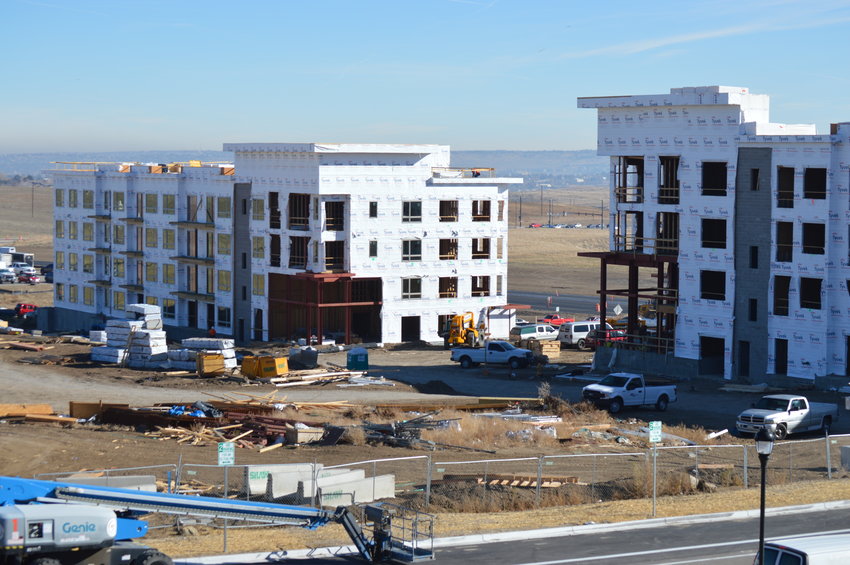 Construction being done near the RidgeGate Parkway Station in Lone Tree on Nov. 9.

An important vote was in 1999 when Lone Tree voters approved the annexation of the 3,500-acre RidgeGate property, Millet said.

RidgeGate is 3,500 acres located both east and west of I-25 and south of Lincoln Avenue, First said. It incorporates the Sky Ridge Station, Lone Tree City Center Station and RidgeGate Parkway Station.

“It has a single master developer, which has been key — Coventry Development — key to having a shared vision with the city,” First said.

The vision was to create something more urban, mixed-use and transit-oriented, she said.

“It kind of comes down to: How do we continue to create a place where people want to be, where they can live and have a diversity of housing options?” she said.

“The mobility hub and the urban trail network that we’re planning is more than just a recreational trail system, but it is hopefully getting people who work and live in the area to be able to commute and take advantage of all the great spaces (and) employment options,” First said.

The city also has a microtransit service called Link On Demand, which offers transit throughout the city, Holwell said.

“We’ve partnered with (an) entity called Via, which develops an app much like Uber,” he said. “Using your smartphone, you can summon the vehicle directly to you and take it to any other location in Lone Tree for free.” 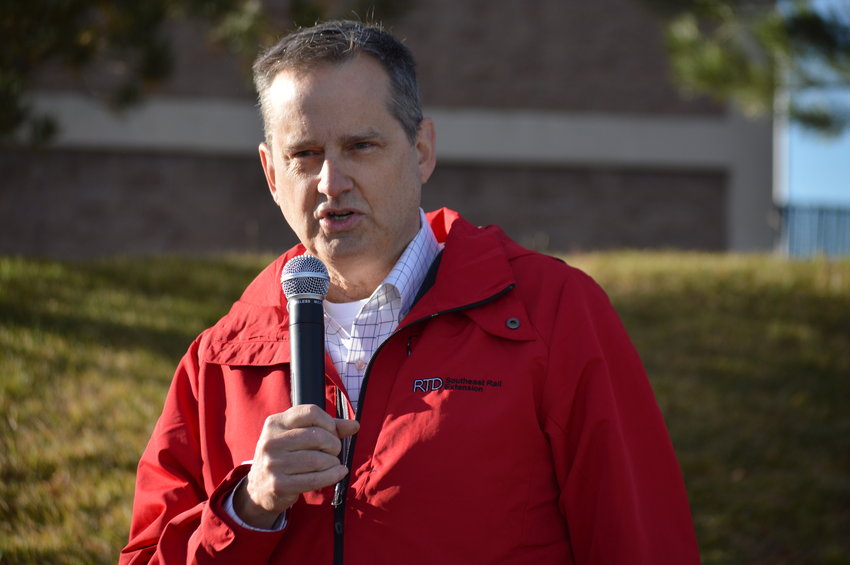 The development of Lone Tree’s transportation systems and transit-oriented communities has been purposeful, and it wouldn’t have been possible without the partnerships of organizations like RTD and CDOT, Millet said.

Hultin encouraged those at the tour to communicate what they learned with their agencies and to collaborate with others on strategies to meet the 2050 greenhouse gas emissions goals.

“You have to think of what you want to see happen 15 to 20 years from now, because some of the decisions that resulted in all of this were made by people like you, many, many years ago,” said Brian Welch, RTD’s acting assistant general manager of planning. “We want to work with you to make things better for our community.”

Other items that may interest you

USA Gymnastics Men’s Competition in Parker
Representing the future of men’s gymnastics, 60 young men from across the state have trained countless hours to compete at the 8th annual 20 Mac Throwdown.

We have noticed you are using an ad blocking plugin in your browser.

The revenue we receive from our advertisers helps make this site possible. We request you whitelist our site.